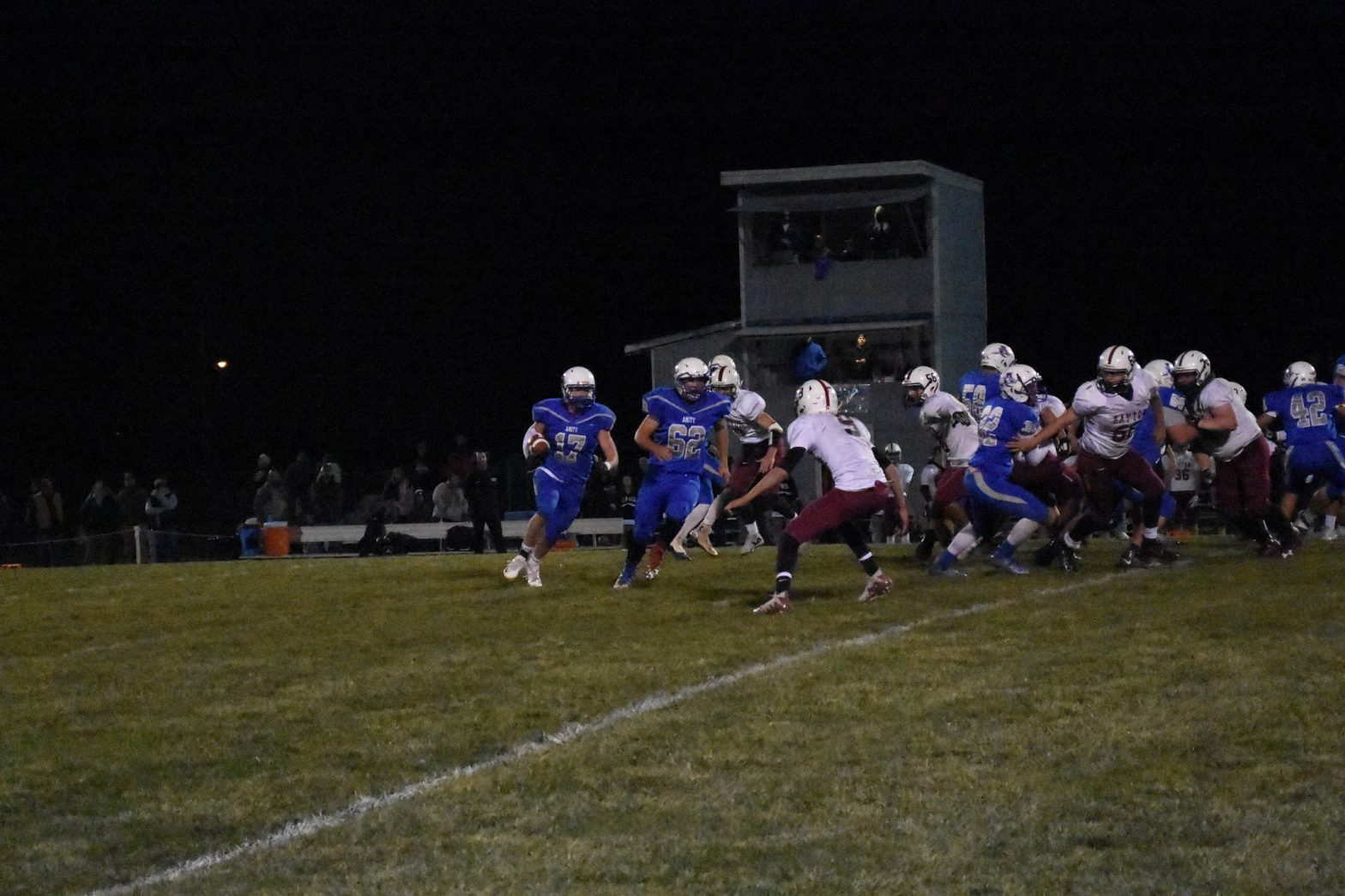 Just how historic was Amity’s 54-0 trouncing of Dayton? Other than Amity attaining a 3 game win streak over Dayton for the first time since the run of four from 1999-2002, last night saw the largest point differential in an Amity-Dayton game, ever. That’s right, ever. Unbeknownst to everyone in attendance, they were all witness to history.

The great Amity dynasty of the Late 90’s and early 2000’s couldn’t do it, nor could the legendary Dewey Sullivan.

This historic rivalry has had its blowouts, but none to the effect of a 54-0 final score. Dayton beat Amity by 53 in 2005, (59-6) which had been the largest margin, until last night. Freshman Reagan Clark, a backup fullback and Amity superintendent Jeff Clark’s son, scored the final touchdown, stretching the Warriors lead to the record amount. The 2 point conversion failed, but the feat had been achieved.

In the eyes of many, it was over before the ball had been snapped, but not before the ball had been kicked. Amity successfully recovered an onside kick to start the game, something Amity has gotten quite good at this season. Four snaps of the ball, including a 17 yard opening play run by Senior Dylan Nyseth and a 26 yard reception by Junior George Hatch later, the the Warriors had a 6-0 lead, and took with them any doubts about what kind of game it would end up being.

Dayton would march to the Warrior 15 on the following possession, and even converted on 4th down at the Warrior 49 yard line, but an interception by Sophomore QB Kaden Fergus would give Amity the ball right back with 7:31 left in the 1st. Nine plays later, Nyseth would find the end zone, and the Warriors had a 14-0 lead.

The downhill spiral continued. Dayton, though springing big plays at times, could never get a rhythm going against the jailbreak 3-3 stack warrior defense, and found themselves down 42-0 at halftime. The white flag, or in this case white jersey, was sufficiently raised once Amity scored five plays into the second half, instituting a running clock.

Senior captain Cody Dyche, leading a Warrior backfield that ran all over the Pirates , “(beating Dayton on senior night) feels great, I was definitely expecting a little more out of (Dayton) though. We played really well.”

Amity rushed for 313 yards and 42 points just in the first half, having seemingly no resistance from Dayton defensively. Dyche said, “(the running game) was great. They just couldn’t stop it. Our blocking was great and they just didn’t have an answer for it at all.”

Dayton, who had started to get a rhythm offensively in the last few weeks, scoring 44 on Rainier and 21 on Taft, couldn’t muster any offensive movement virtually all game.

Dyche, commenting hesitantly on the Warriors defensive play against the Pirates, “I don’t want to be blunt, but it’s too easy. There wasn’t much they could do, they couldn’t figure anything out that would work against us.”

Dayton is in rebuilding mode, and everyone knows it. Amity is in pursuit of the programs first state championship since 2009. A mixing of circumstances, producing the perfect conditions for history to be made.