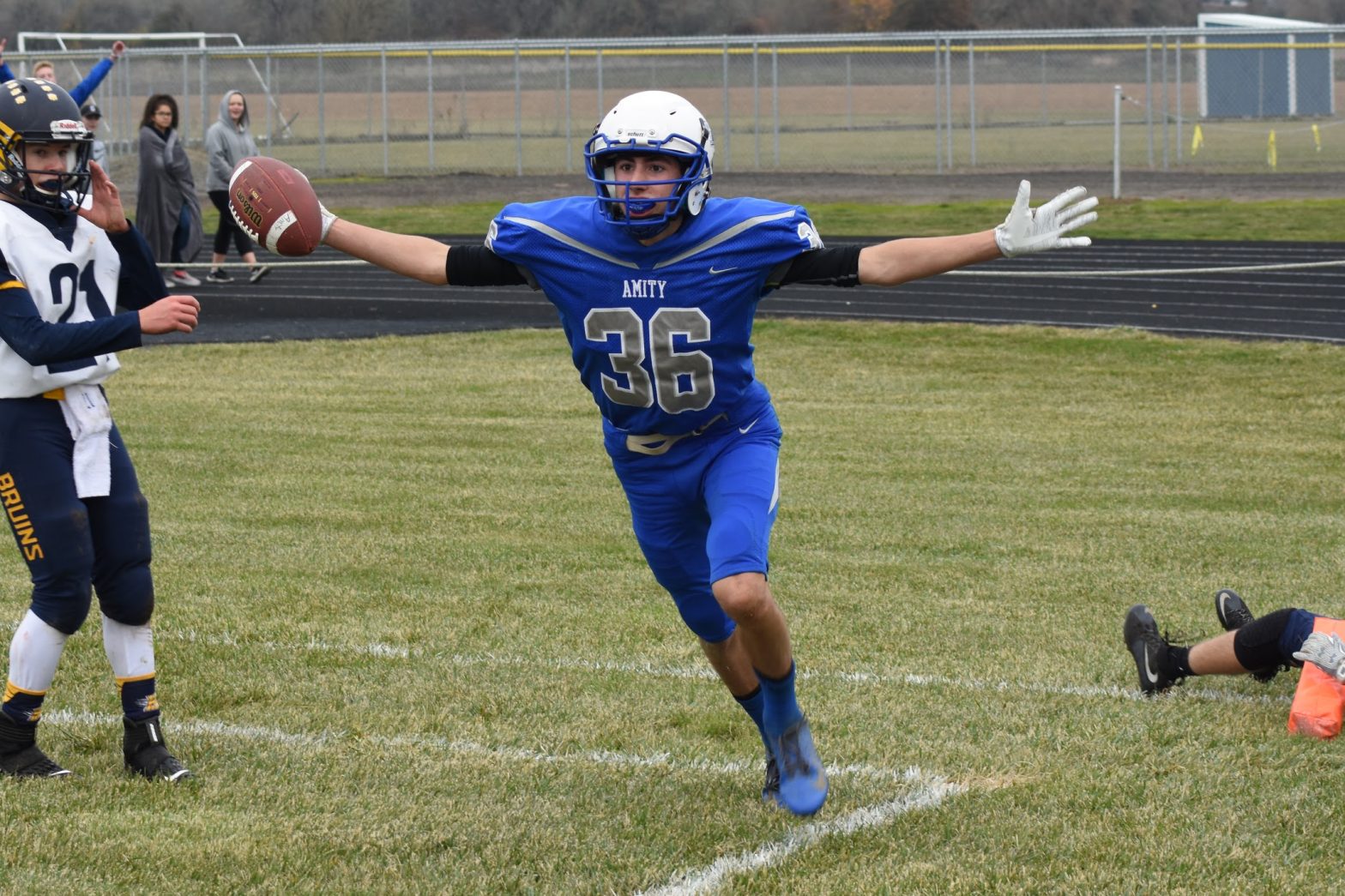 No, it isn’t 2018. Amity and Brookings-Harbor just happened to draw eachother again in the first round this year. Though the sunlight of a pleasant November Saturday afternoon differed from the dark, cold, damp setting from last season, the result was very much the same the second go around.

Brookings senior Ethan Hooper, “We were all excited to play Amity again. We wanted a redemption tour, and while that didn’t pan out we played up to them a lot better this game. We were excited about the match-up and the opportunity to show what we had gained over the year.”

Though the Warriors featured a lineup that consisted of no returning offensive starters from the 2018 squad that led the state in points-per-game, Amity was at home; a place they hadn’t lost at since playing Harrisburg in the first round of the state playoffs in 2017.

It took Amity just eight plays to find the end zone, as senior Dylan Nyseth took a toss seven yards to the house, stiff arming a Brookings defender to the turf in the process. A recovered onside kick and one more offensive play later, and the Warriors were up 12-0 with just over 4 minutes gone in the game.

Brookings would fumble on it’s second offensive play, and Amity’s Keenan Graham would recover on the Bruin 33 yard line. Eight plays later, Cody Dyche would get his second touchdown of the game on a 1 yard touchdown plunge off right guard. Though the Warriors failed on all of their first three 2 point attempts, the score was 18-0. And all momentum was with Amity.

Brookings would follow with a lengthy drive of their own, showcasing multiple screens to try and take advantage of the size advantage they had at on the perimeter, something that caught the Warriors off guard.

Senior Linebacker Cody Dyche, “The game plan was to stay aggressive, but they ended up throwing the ball a lot more than we expected so we switched it up a bit”.

The drive culminated in a 20 yard touchdown pass to Junior Oggie Badger, but it would be the only offensive highlight of the first half for the Bruins

Amity would score twice more, making it 30-6 with 2:54 left in the first half. On the Warrior onside kick attempt, Brookings Senior Offensive lineman Jason Vanginderin caught the ball out of the air and returned it 50 yards for a touchdown, evading the possible tackler of Amity sophomore Braxton Morgan. Ethan Hooper on his teammate, “Oh man, Jason is our most athletic lineman so he does have some speed. However, he plays baseball so I think that was a regular play for him to catch it and go and when he saw green grass he wanted it. I was actually right behind him and he slowed down to stiff arm a kid and it was maybe my favorite play of the year. Finally a big man getting some glory.”

It was now 30-12 Warriors, the score that would last through halftime.

The Bruins changed defenses at halftime, moving from a 5-3 ‘Bear front’ to a 4-4 gap control style approach. Brookings senior Ethan Hooper, “On the defense side of the ball we were just loading the box and daring Amity to pass. We got what we wanted, but their receivers made some plays over our DB’s and took the momentum from our defense. At half we switched into a 4-4 to contain the edge more but Amity’s blocking scheme is nothing short of impressive. Hats off to them.”

Those blocking schemes would lead to a touchdown for Russel Brown in the 2nd half, as well as another for Dylan Nyseth. Ethan Hooper would score the last touchdown of the Bruins season with 5:31 left in the game to make it 44-18 Warriors, but it was too little too late. With 476 total yards of offense, including 381 on the ground, Amity would end the Bruins season once again.

Cody Dyche, when asked about the Warriors second round matchup with Rainier next Saturday, “I’m excited, I really enjoyed playing them last game. They play hard and are a great group of guys, should be a good game”.

Russel Brown, “It’s going to be a good physical game, I love playing them they are the team that knocks you down then helps you up, and in all honesty the team that makes the least amount of mistakes will win the game”.

Brookings senior Ethan Hooper, who has seen the Bruin football program go from 1-7 in 2016 and winless in 2017 to back-to-back playoff berths, on what it will take for the Bruins to take the next step: “Commitment as a whole. Weight room builds into that as we are going to graduate quite a few linemen this year and some skill positions, so some lower classmen will have to step up. Asides from that, commitment in the summer from the entire team. We keep pushing deeper into the coach’s playbook and growing as a unit. Eventually, the goal is to build a dynasty like Cascade (Christian) or Rainer, who build an identity and stick to it and have success. It starts from the offseason, and I think especially after feeling that competitiveness and respect from other teams this year we will see a bigger push next year for a league title and hopefully a state trophy”.

Brookings will remain a trendy pick in the south next year. Amity will face Rainier for the 3rd time in two years next Saturday at home.

There’s no better time than November.