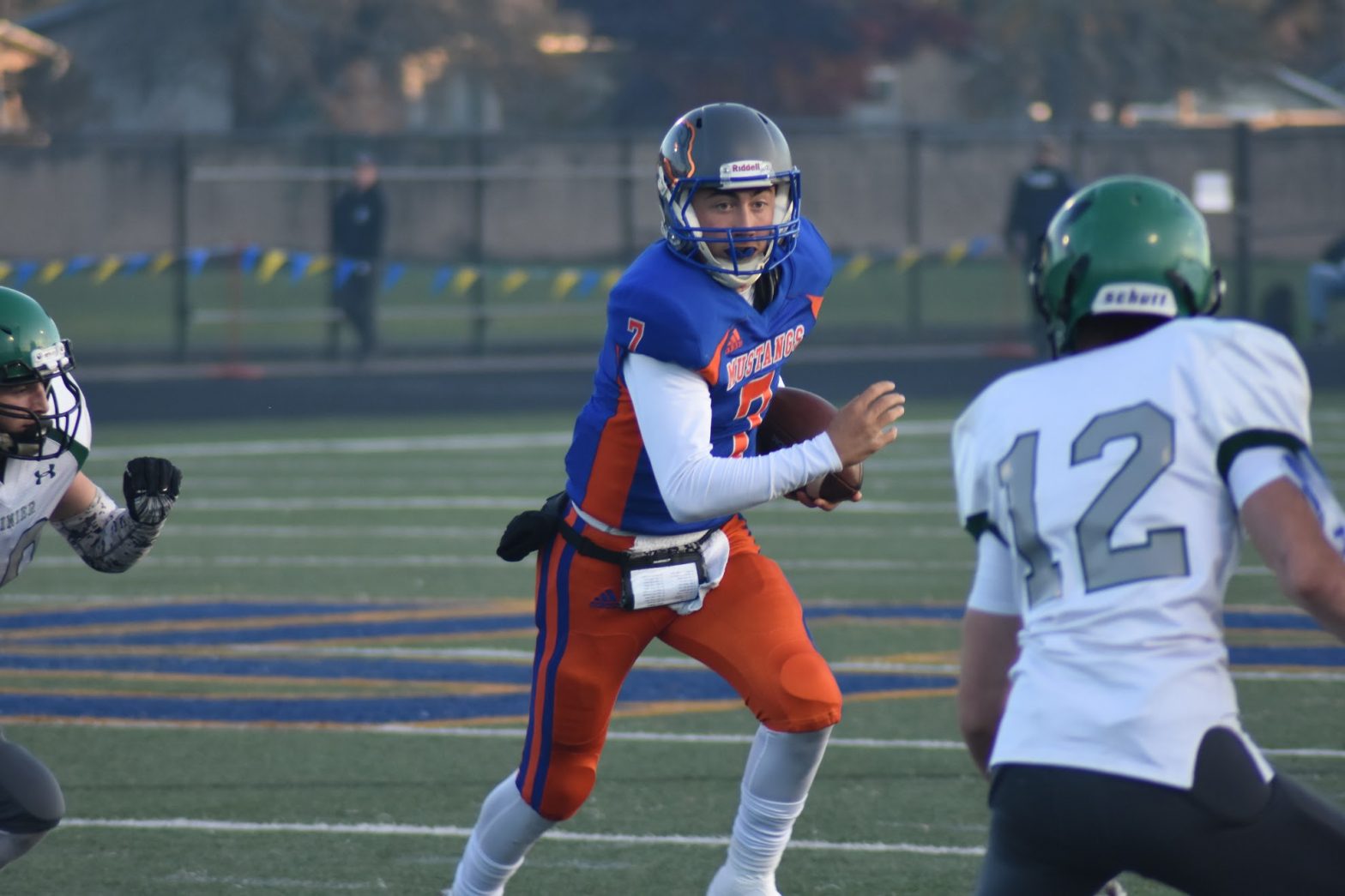 Doesn’t matter who you are or where you come from, if you can throw the ball around like Hidden Valley did against Rainier, you’re a special team with a special group of skill players.

There was a lot of buzz surrounding the Mustang program going into Saturday’s contest with perennial 3A power, and defending champion, Rainier. Could Hidden Valley stop the Rainier diesel offense? Were they ready for the physicality that the Columbians would bring? Both gave complicated answers.

Yes Hidden Valley was able to force Rainier out of the diesel, but no the Columbians didn’t have trouble muscling their way down the field. Yes the Mustangs were able to successfully keep Kenney Tripp and David Katon contained within the Diesel set, but the Columbians aren’t just the Diesel. They have options.

Problem, Hidden Valley is as fast and lengthy as an NBA team. Running 5 receivers into space, with the threat of Kenney Tripp running it if all else fails worked on occasion, including a 2pt conversion in the 2nd half, but moving the ball against the Mustangs through the air constantly was not going to prove fruitful.

Most closely related to Scio at the 3A ranks, the Double wing takes the unbalanced look of the Diesel and, well, balances it. Bring one man in motion, toss it to him, defense doesn’t shift, bam. You got yourself a numbers advantage. Still use the aggressiveness and physicality of the offensive line with a different look, it proved fruitful.

The game started awfully for Rainier. 8 play drive by Hidden Valley to start the game, touchdown. 7-0.

Drive clear to the Mustang 30, fumble recovered and took all the way back for a touchdown. 14-0.

A 6 play, one minute and five second drive later, Hidden Valley made it 21-6. How? Just a casual 55 yard pass from Sam Vidlak to Cameron Decker. For Sam Vidlak, it is casual. The QB has amassed 41 touchdowns and nearly 3000 passing yards this season, and has done so in flamboyant and colorful ways at times. A legitimate D1 prospect, Vidlak slinged the ball all over the place on the Columbians. Didn’t matter if it was to Cameron Decker, Tobias Powers, or to the team Ball boy, it had the chance, if completed, to go the distance.

With 6:37 left in the first half, the scoreboard read 28-6 in favor of Hidden Valley. Rainier had the ball, and would get it to start the second half. With any luck, the Columbians could score, leaving so little time on the clock the Mustangs couldn’t score again before half. If this happened and then Rainier scored to open the 2nd half, they’d be right back in a one possession ball game.

Step one, score and take as much time off the clock as possible. 13, yes 13, plays and 80 yards later, Brandon Issacson found the endzone out of the double wing, and after Kenny trip found David Katon for the two point conversion, the scoreboard read 28-14, with 1:14 left in the half. One could argue, the Columbians had left 1:14 too much on the clock.

Hidden Valley almost proved that argument to be correct.

The Mustangs fumbled a completed pass on their own 39 with 15 seconds left. Rainier would run one final play before letting the clock run out.

28-14 at Half. Step one was complete, now for step 2. Find the endzone at the start of the second half to make it a one score game.

12 plays after the kickoff, Rainier was at the Hidden Valley 1 yard line and had 4th and goal. The double wing took the Columbians clear from the brink of a blowout to the doorstep of an upset, there was no other set for this situation than to stick with it. Double wing, toss left, no gain. Hidden Valley ball.

An extreme shift of momentum occurred in this moment, all Rainiers best hopes and efforts had been based off that first drive of the second half, and it was fruitless. It was Mustang ball, and all they had to do was play keep away. But you know just as well as I do, this wouldn’t be nearly as long without good reason.

Hidden Valley, in a violent and sudden re-changing of fortunes, got tackled in the endzone on their first offensive play of the second half. Safety. Rainier ball. 28-16 with 5:53 left in the game.

It would be Hidden Valley’s day though, as the game slowly slipped further and further into the control of the Mustangs, and Rainier would not find the endzone again.

The Mustangs would score on their next two possessions, and would kneel it out on the third.

Mustang QB Sam Vidlak, when asked about if anything Rainier did surprised him, “Tonight Rainier often loaded the box in an effort to stop the run, we like to be a balanced offense but depending on the game the run to pass ratio can vary. There wasn’t a lot that surprised me about Rainier’s defense, we knew that they would be a big physical team but we knew we they would have a hard time stopping our offense if we executed, our guys did a great job on all facets of the offense tonight. Hats off to Rainier on a great season, they played hard all game”

Rainier put up a valiant effort against the Mustangs, and given a few breaks, possibly including a healthy Stone Ware, the Columbians could’ve pulled it out. But nobody left Cottage Grove with any misconception. Hidden Valley was the better team.

So, let’s talk about the Mustangs a bit. Consider this a quasi-preview for those going to go watch the state championship game.

The Mustangs are legit. They’d be a top 5 team in 4A, and could possibly be #2 or #1. Sam Vidlak is a legitimate D1 prospect, and all of their receiving threats are monsters. Lawrence Matusik, Jeremiah Noga, Cameron Decker, Nate Vidlak, etc. They’re all all-state caliber. The run game? It’s not half bad either. Tobias Powers can take a 5 yard play up A gap and turn it into an explosive momentum shifting run with no warning. Need a yard? Perhaps for a 3rd down conversion or touchdown at the goal line? They have that too. Fullback Tobias Noble, the cowboy collar wearing, shoulder lowering, ‘three yards and a cloud of dust’ embodying senior is nothing short of a Wing T coach’s dream.

And if nothing else, that defense can fly around the field faster than just about anyone at 3A.

It’s been a dream season for Hidden Valley, something that isn’t lost by Sam Vidlak, “It’s been special to have been a part of a group like this up to this point. This team’s motto has been to change the culture, in recent history Hidden Valley hasn’t had a successful football program and to be a part of the group of guys to turn it around is pretty awesome. I couldn’t be more proud of our coaches and my teammates.”

Columbian Senior Easton Crape, asked about what the message was from coach Mike King after the game, “message after the game was addressing that what the senior class has done is incredible, 41-7 in four years and 3 straight semifinal appearances and a state championship…not a lot of people can say that. We will be missed but it definitely isn’t the end of the road for our team. We are always learning and building. I’m proud to be able to call myself a Columbian and grateful to have got the opportunity to play under a coach staff like we have in Rainier”.

Santiam Christian v Hidden Valley, the state championship nobody in August, but everyone in October, saw coming. Roseburg High School, next Saturday at noon. If you can be there, I highly recommend doing so.