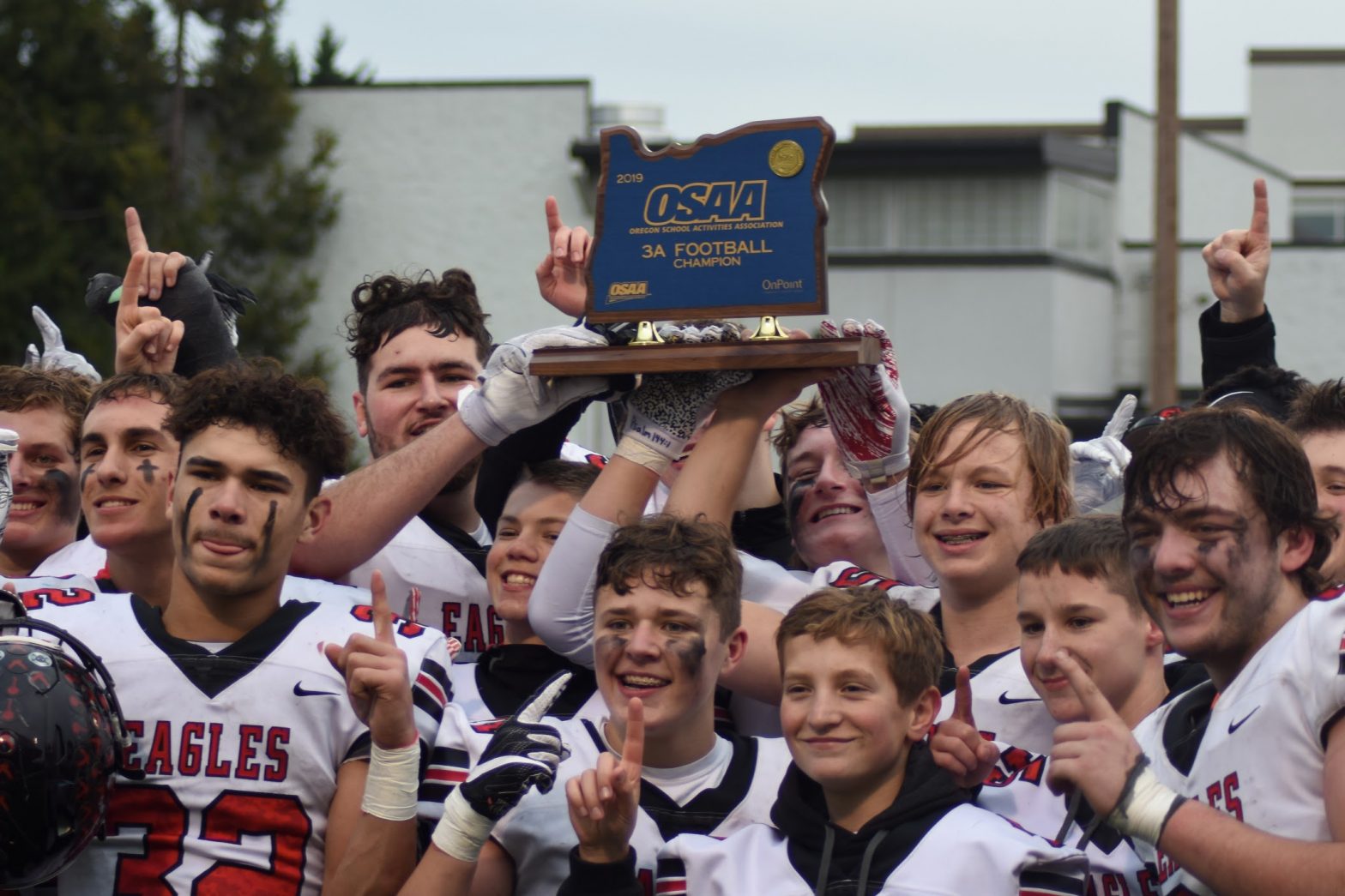 To the casual observer, Santiam Christian taking down Hidden Valley 41-34 Saturday at Roseburg High School was just another championship game. The back and forth, the atmosphere, the crowds. From an outsider’s perspective, Saturday may have just been another football game in November.

Make no mistake, on the field and off it, Saturday had implications that will be felt for the foreseeable future. Not only was the game marked by performances that will become part of each schools respicitve lore for eternity, but the contest was also representative of a debate going on in conference rooms and meetings across the state. More on that later.

Let’s talk about the game itself first.

SC took a page out of the book of Amity and Rainier: Shove it down their throats until they’ve put so many bodies in the box you can throw with ease. Santiam Christian coach Matt Bain even resembled Amity coach Joel Magill, dawning cargo shorts despite the freezing early afternoon temperatures.

Run it down Hidden Valley’s throats they did. Six plays in SC’s opening drive, six runs. 12 plays in their 2nd drive, only two passes. The Eagles had 83 rushing yards, but only 14 pass yards, through a quarter and 52 seconds.

Now take that, flip it on it’s head, paint it orange and blue, and bam. You’ve got yourselves the Hidden Valley Mustangs. Out of the Mustangs first 12 plays, only 4 were runs. When HV got their third chance with the ball with 11:08 left in the 2nd quarter, despite the defense that had been played, it was clear what this game would be:

The arm of Sam Vidlak and his receivers hands vs the legs of Ely Kennel and Marcus Fullbright.

The one to mess up first, or most, would be playing catch up most of the game.

The thing about the contrasting styles is this, one is much more prone to possible misfire than the other. Former Ohio State football coach Woody Hayes once had a quote that summed it up, “only three things can happen when you pass (a completion, an incompletion, and an interception) and two of them are bad.”

If SC could play just well enough, force some missques from Vidlak or his receivers, win the turnover margin, win time of possession, the Eagles could pull the upset.

At halftime, it was happening perfectly. Vidlak had only 7 incompletions in the first half, but on 3 occasions did he have consecutive incompletions. On Hidden Valley’s four drives in the first half, only one ended with a PAT attempt. SC was playing just well enough on defense in spots, forcing 3rd and longs, Hidden Valley was shooting themselves in the foot just enough with penalties, and SC’s rushing game had produced a nearly best case scenario for the Eagles at half.

14-7 in favor of Santiam Christian.

The third quarter held to the same pattern generally. SC played just well enough to contain the Mustangs, and held the ball long enough to create urgency. The key word, however, is contain.

Hidden Valley went on a 15 play, 72 yard drive in just under 4 minutes, and found the endzone with just over three and a half minutes left in the 3rd.

15 plays is an impressive feat by the Eagles, as the Mustangs calling card all year has been the long ball, the quick strike from Sam Vidlak to any of his myriad of receivers on a post or a fade, throwing over the whole defense. To make the Mustangs play the long game, with shorter completions with little to no yardage after the catch, is an accomplishment in and of itself. ‘Contain’ is not permanent when discussing the Hidden Valley Mustangs however.

That 15 play drive ended in a HV score, and from there it seemed like the flood gates had been opened.

SC was quickly forced to punt, and despite holding a 20-7 lead earlier in the 3rd after scoring on their 2nd half opening drive, it felt like they were behind suddenly.

SC started their drive with 10:59 on the clock at their own 37. This drive was unique though. This one started out with consecutive pass attempts, and completions by Kennel. 3 yards to Villers, then 10 to Mehlschau. Then Fullbright broke one down the left sideline for 50 yards and a SC score, almost providing a sigh of relief to Eagle Fans on the south sideline stands.

Vidlak would pick apart the SC defense on the ensuing drive, and once again we were tied. The defensive battle had quickly devolved into an offensive shootout.

Kennel’s second pass attempt of the following drive would be tipped at the line of scrimmage and intercepted. HV now had the Best quarterback in the state, momentum, and field position.

SC would go three and out and punt. Luckily for the Eagles, HV would follow up with a punt of their own. SC now had the ball on their own 45, down 7, with 3:04 left. What followed was possibly the most obscene and unlikely run I had ever seen.

This time there was no read. There was no jet motion, no window dressing. Just straight up QB lead to the perimeter, normally not a touchdown play. Find a lane to cut up in, get a modest gain and line up for the next play. Problem was, there wasn’t a cut back lane. D gap? Filled by Hidden Valley’s Matthew Iwamizu, who had just outflanked SC tight end Joe MaQatish. E gap? Being filled by free safety Cameron Decker. If there is such a thing as F gap, that’s where green was found by Kennel, 55 yards of it.

Tie ball game. But Hidden Valley will get the ball back with more than enough time to score and win the game. But state championship games always have something weird happen right?

Hidden Valley did get the ball back on the kickoff, for all of about 6 seconds.

After a reverse handoff was given to him, Matusik fumbled the ball, seemingly forced by his teammate Aiden Moon-Reed. SC recovered, and now had the game in their hands. Only 19 yards separated them from the endzone, and with it, the lead. The Eagles would get to the Mustang one, before Hidden Valley, recognizing the situation, literally let Marcus Fullbright get into the endzone to conserve time. SC now leads 1:06 left.

Hidden Valley got the ball on their own 21, and 6 plays later were at the SC 25. A completion to the 8 yard line was negated by a holding call, and now Hidden Valley’s last hope was a hail mary from the SC 45 with just seconds left in the game.

Vidlak would never get the throw off, he was sacked with 0’s on the clock.

Goliath had been defeated. The 479 passing yards by Vidlak were ultimately outdone by the 358 yards on the ground, the advantage in time of possession, and 82 less yards in penalties by SC.

Part 2 will come later this week. That will cover all of the off the field reasons this game meant so much.

Congratulations to the Santiam Christian Eagles, the Champions of 3A Football.