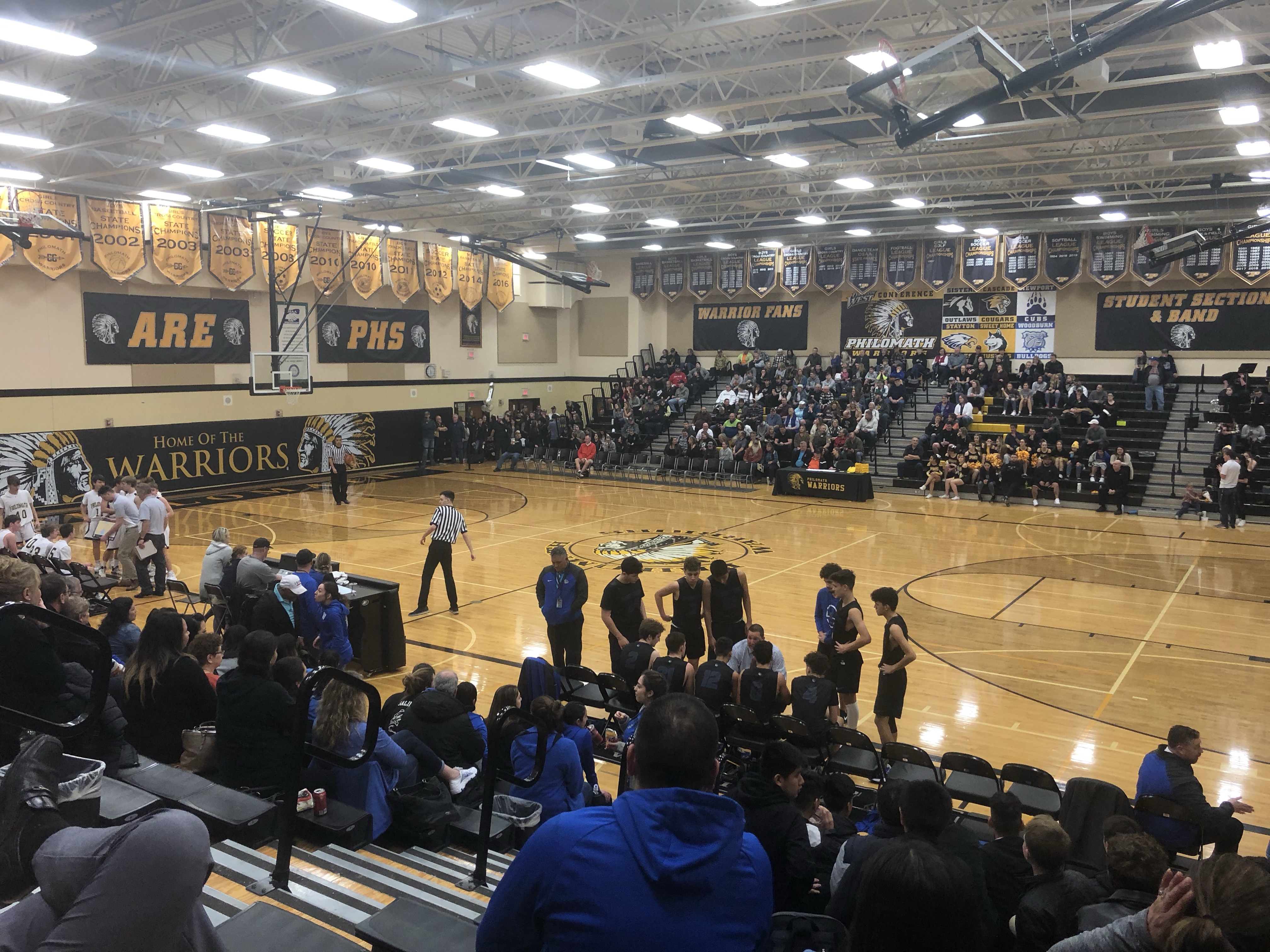 Philomath’s gym when it’s full is one of the best atmospheres in the state. Was great to see that place rocking again.

Here’s how the game went:

Frantic but in control on the defensive end, methodical and at ease on offense. It was Warrior ball 101. Aside from 2 charging fouls, Philomath was near 100% efficiency. Next to no turnovers, winning every rebound battle, getting good shots every time they had the ball. Despite the hard hedges on screens by Woodburn, Philomath was able to find their way out of it and wait the pressure out. It was fun to watch.

The start of the second quarter was a little messier for the Warriors. Going from man to a 2-3 showed promise initially, but a quick 3 in the former by Jeovanny Marroquin and an inbounds bucket shortly thereafter got Philomath back into man to man. The defensive change embodied the saying ‘if it ain’t broke, don’t fix it’. Immediately Philomath was back in step with Woodburn, after the 2-3 had put them a step behind on rotations.

Woodburn made every attempt to speed up the game in the first half, namely using a 1-2-2 press. Philomath handled this fairly easily. The Warriors level headedness can’t be understated, they simply wouldn’t commit ‘the dumb mistake’. Philomath was capitalizing every possession, Woodburn wasn’t. That in essence summed up the whole first half.

But basketball is two halves.

In the second half Woodburn’s hay makers started to make contact, and all the sudden Philomath was on its heels. Jonathan and Jeovanny Marroquin along with Georgio Bustamante headed up the 1-2-2 like they had in the first half, but this time Philomath wasn’t quite as sure of itself. Woodburn showed an increased sense of urgency and played with a level of energy that flat out wasn’t there in the first half. Philomath was doing what they usually don’t; turn the ball over.

Suddenly the Warriors were dribbling off their feet and knees, passes we’re getting picked off, and the rebounding position that they seemingly always have a hold on was gone. Philomath took a time out with 2:34 left in 3rd, up 27-24.

The downward spiral was headed off, but a rapid reclamation of their at one time 10 point lead didn’t happen. Woodburn hung around, and at the end of 3 was only down two at 30-28.

The 4th mostly held to what Woodburn wanted, which was a frantic pace on both ends of the floor. Part of this was aided by a change in Philomath’s defensive priorities, one that was inadvertent and a product of Woodburn’s pressure. The Warriors were no longer playing the ‘long game’ defensively, I.e. playing defense to force a bad shot. Playing to force a bad shot inherently makes an offense possess the ball for long periods of time, or waste a possession. Instead, they were playing defense to steal the ball and get out in transition. The problem is once you miss on the poke out attempt, the person you were just defending now has an open path to the hoop, meaning someone has to come help. As soon as someone comes to help, and the ball is kicked out, open 3 if nobody comes to help, easy lay up.

The problem for Woodburn was that despite this, the ball just wouldn’t go through the hoop. Missed layins, missed open 3’s, and even missed free throws did the bulldogs in.

The 4th was back and forth, and with 1:54 left Woodburn even took the lead at 36-35. But ultimately Philomath was just calm enough and hit just enough of their shots to win.

Philomath is on the fast track to the state tournament. There’s a slight chance Woodburn could end up on the road in the first round, but right now should be favored to make the state tournament also. Woodburn is dangerous. Unlike Philomath, you aren’t sure what you’ll get with Woodburn any given night. That can be seen as a negative, as consistency is more less seen as a mark of a championship team, but all the components are there. If the Bulldogs can put it all together for a string of 2-4 games, who knows.