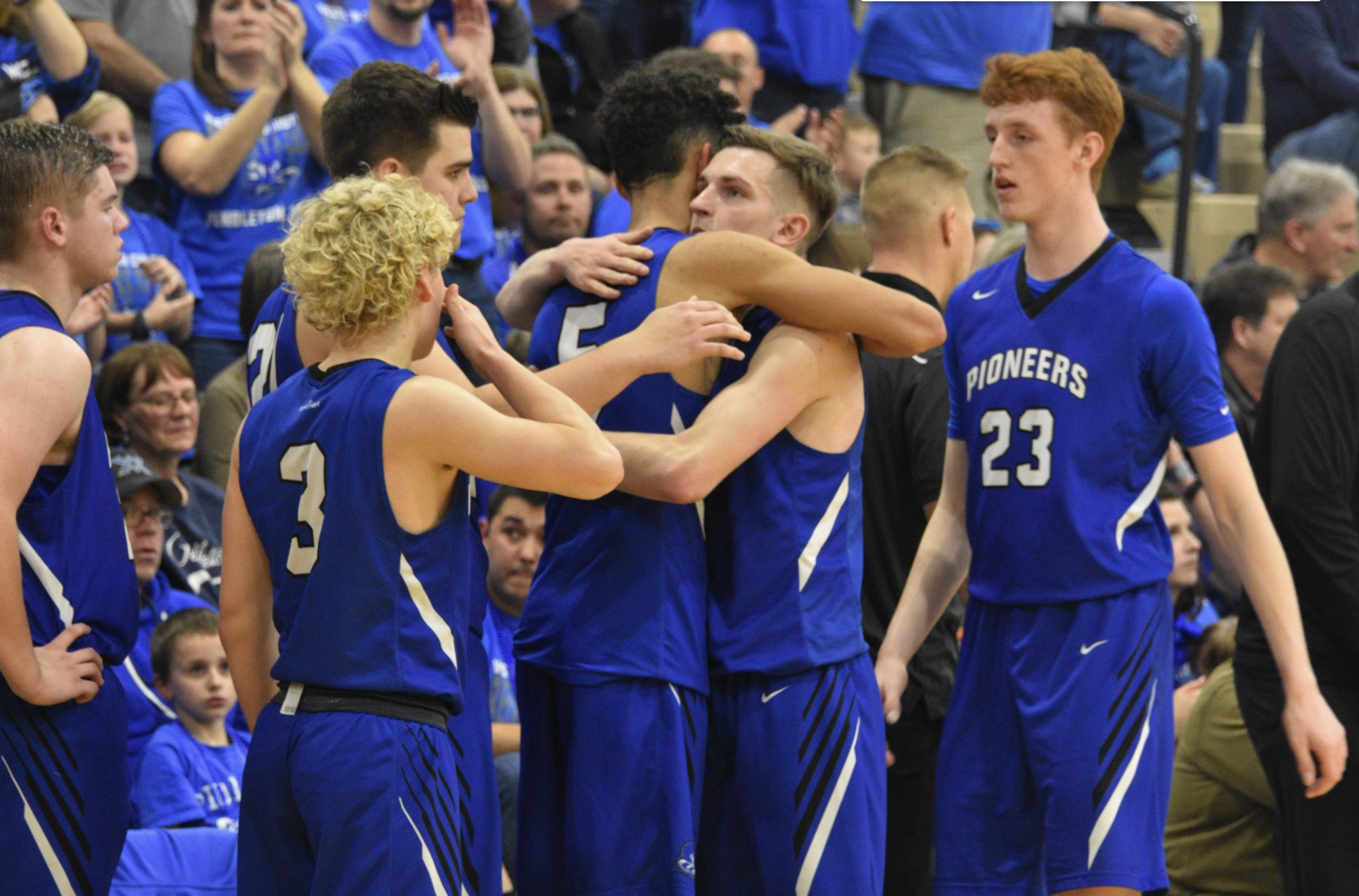 History was at Western’s doorstep. A win over Toledo and they’d be solidified as one the greatest dynasties in the history of Oregon high school basketball. Thirty-two minutes was all that separated this version of the Pioneers from immortality. But this go around they were the hunted, not the hunter.

“Before the state championship in the locker room we called it a David vs. Goliath scenario”, said Conner Marchant, a senior for Toledo.

Unlike years prior, where Western had been chasing the Irrigon dynasty, trailing the Santiam explosion, and just a step behind the Columbia Christian juggernaut, the Pioneers were top dog. It was their crown to lose, their mountain peak to fall off of. For a team that plays as efficiently and consistently as Western, they should have the upper hand in this climactic season defining contest.

Coming into the game, Toledo was playing with a fire in their belly only the bloodlust of revenge can create. Marchant put it this way: “Playing Western put a fire to us.  When we saw the bracket was laid out the way it was, we wanted them. We wanted to beat them. The fact that it was the state championship game obviously raised the desire for us to beat them. They were our motivation. We watched them, we knew everything their guys did, we just knew how we would play them. They have that type of program, a winning program. We wanted to beat them because they always whooped us, and it was our turn. It was definitely fuel to a fire.”

The Boomers, from the opening tip, looked like a team possessed.

Toledo was moving patiently, under control, emulating Dean Smith’s pre-shot clock North Carolina teams. Western tried to push the pace when the opportunity arose, but the Boomers were quick to retreat and set up their defense, aided by a high first half shooting percentage.

The first half stats speak for themselves.

The opportunistic defense was being shut out of opportunities; the ‘run and gun’ team was being shut out of chances to run; the traditional program was being shut out of a chance for history. Payton Richardson, the reigning state player of the year, bound to win his second straight of the same award (and on his way to D2 Seattle Pacific after graduation), was the one being leaned on to keep Western in the game until they could click. A twelve point, two rebound, and two block first half performance was enough to keep the Pioneers within thirteen at halftime, but no closer. Toledo was playing lights-out defense, even to the point Alex Nicoli had just two shots all half, only one a 3-pointer. None went down.

The second half formula for Western was quite simple: take a deep breath, let the game reset, and get back to what they do best. Simple enough, just grab the pace from the get-go and get moving.

The third quarter bore no fruit.

Western couldn’t get anything to go their way.

At one point the lead ballooned to twenty-one. But for a fleeting moment, Western made up ground. Gary Hull threw on the press in the middle of the third, initially to no avail. Towards the end of the quarter, however, Toledo started to slip up. The pace started to increase, turnovers started to stack up, and Western was starting to have it their way. But then, the quarter ended. The game was reset, and that three minutes of progress was blown to bits with the closing horn of the 3rd quarter.

Toledo had a chance to catch their breath, to reset, and to get themselves prepared for the Dean Smith-style 4-corners offense as they’d run in the first half.

Western had to redo it all, and make up a seventeen point deficit in eight minutes. All Toledo had to do was run around in the half court and not give them a chance to do it.

It took a minute, but the pressure’s effect started to show again. Western put together a 8-0 run through the first three minutes to trim the deficit to nine, but it was for not. Offensive rebounds doomed the comeback attempt, and Western had to turn to desperation fouling at the 2:45 mark.

Rarely is the nail-in-the-coffin moment so pronounced, so definite, so powerful it’s impossible to not appreciate it as it happens. Usually it’s a late-game three, or a breakaway dunk that sends the crowd into a frenzy, knowing the game is all but over with. This game had something so unique it could only have happened in this circumstance.

Payton Richardson, state player of the year and inarguably one of the greatest players in the history of 2A basketball,  had been in foul trouble throughout the game. The usually fearsome Western defense spearheaded by Richardson wasn’t effective, in part due to his high foul count throughout. It bogged down the game, slowed the pace, and was arguably the most consequential piece of understanding the game. Richardson fouled out with 2:12 left, and at that point the air was completely out of the Pioneer’s sails. It was over. The nail-in-the-coffin moment was Richardson leaving the floor in tears.

The moment, and what led up to it, wasn’t lost on anyone, not even Marchant: “Everytime I went to put in work in the gym, Payton Richardson was on my mind. He’s the toughest defender I have ever gone against.”

No repeat. Just like that, the worst shooting performance of the season, a rebounding deficit of 21 to 31, and a slower pace than could be properly alleviated by the tactics normally employed by fast paced teams. It all did Western in. The Pioneers, though possibly more talented, were beaten by a team that had the kind of chemistry that only living in a small town together for an entire childhood can bring. A team motivated by the kind of forces that only a small town deprived of a state title in any sport for over sixty years, recently teased with coming so close to one, can create. A team with an understanding of their limitations and strengths, their assignments and duties, their place within a system and cohesion within that can only be rivaled by Western itself.

That community, as Marchant puts it, was undoubtedly one of their driving forces from the beginning. “It felt like their state title just as much as ours. Without them we really couldn’t win it all. Before the state championship, me, Clifton [Howard], Mason [McAlpine] and Jax [Jaxon Rozewski] would talk in the hotel room about that. Specific people that have impacted us.”

After the game, coach Hull immediately turned to the 2020/21 season, and asked the guys returning a question, “How hard are you going to work? Are you just going to be motivated for a few weeks and then it fades away and never think of it again, or are you going to work as hard as the team that lost in 2018 did and get back here and get the job done”.

Now, till the end of time, it’s the question that burdens every team who comes short: “What if?”

What if Toledo hadn’t had such a hot streak in the first half from deep, and the following rebounds had rickashayed long distances waiting for Western to turn them into fast-break opportunities? What if Payton Richardson hadn’t got in foul trouble? What if the Pioneers had lost to Santiam earlier in the season, snapping them back into a hunter’s state of mind rather than that of the comfortably-hunted? What if the press had more of an effect in the second half, and the pace of play had been thrown permanently into Western’s comfort zone?

Payton Richardson is now playing basketball at D2 Seattle Pacific, majoring in Business Marketing with a minor in Bible Theology.

Coach Townsend is no longer with Toledo, which is a story in and of itself.

Special thanks goes to Katie Richardson, without whom this project would’ve never been possible.