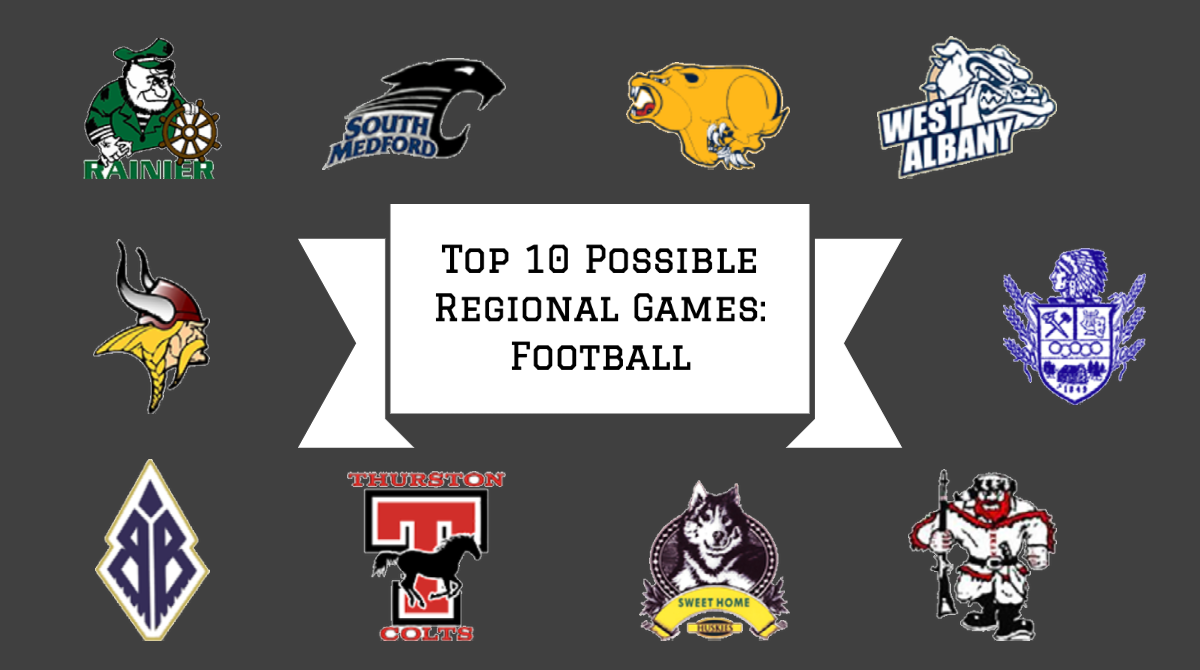 Thursday the OSAA published a memo that “instructed schools to prioritize local and regional play, even if it means competing outside of a school’s classification” (quote pulled from OSAAtoday). Giving more weight to the guidance, the OSAA has also opted out of using its traditional ranking system.

This got us thinking: since leagues essentially don’t exist for the 2020-21 school year, what are some of the more interesting potential matchups we could see? We started to jot down a few just to see where this would go, and… well, you saw the headline. This piece is just going to look at football matchups, as it’s the first sport that came to mind.

Rankings are determined by a combination of ‘excitement level’ and likelihood of actually happening. Likelihood in some cases based on geographic isolation, in others off conversations had with local figures.

Honorable mention – Amity v. McMinnville (Excitement 9, Likelihood 0) – Amity has tried to schedule this game many times before, but McMinnville has denied it every time. There have been many years the Warriors would’ve (or atleast could’ve) taken down the neighboring Grizzlies, though this may not be one of those instances, it would be fun to find out. Last time they played, as can be found in the available archives, was the first game of the Warriors’s inaugural season in 1917, the final score of which is not known.

Honorable Mention – Oakland v. Sutherlin (Excitement 5, Likelihood 5) – If Oakland were a likely championship contender at the 2A ranks, this would be higher up the list. The last time they played was 2017 (Oakland won 22-7).

Honorable Mention – Gladstone v. Oregon City (Excitement 7, Likelihood 2) – Like Amity v. McMinnville, this almost certainly won’t happen exclusively because Oregon City has nothing to gain from it. The last time they played was 2000, and Oregon City won 42-13.

If proximity were the main concern, this would be one of the most obvious 4A-6A matchups. Banks is relatively isolated in its league to begin with. Astoria, Tillamook, and Seaside all are relatively close to each other and have close ties among their communities. Valley Catholic doesn’t really count purely because of their status as a Portland-area private school. Because of proximity, Banks has more connections with Forest Grove and to the Hillsboro schools than it does with Tillamook. This would be the perfect opportunity to jump classifications and have the Nehalem Highway rivalry and/or the Highway 26 rivalry become real.

Proximity-wise, Rainier v. St. Helens makes more sense, but Rainier v. Scappoose would be much more exciting. Rainier is one of very few 3A teams that can realistically win a title this upcoming season thanks to the juggernaut that Santiam Christian has become, and in recent years it has become one of the state’s premier powerhouses. Scappoose, since its move to 5A, hasn’t fallen completely off the map, but nonetheless could be in a position where Rainier walks in and makes a very good game out of it. After all, the Diesel doesn’t exist at 5A. It could be very lopsided, but it would be fun to find out. The last time these teams played was 2013, and Scappoose won 32-55. In 2012, Rainier won 22-21.

Let’s be honest: Santiam Christian would be a title contender at 4A. They’d be a 11-14 seed in 5A if given the chance. It is not out of the question, then, that they could compete with West Albany, a 5A semifinal team from last season that will almost certainly fall off a bit due to graduating its seniors. Of all the 3A-5A potential matchups, this is by far the most intriguing. But again, ‘What does West Albany have to gain from it’ would be the first and likely only hurdle to kill this. These two have never played each other.

Grants Pass, North or South Medford, Crater, we don’t care. Just give us Sam Vidlak and that myriad of receiving threats against a bigger school than 4A. Put Vidlak’s arm on display where the larger schools, larger media outlets, and the general high school football fan population of Oregon can’t ignore him anymore to the degree they currently do. Despite his commitment to Oregon State, there’s still a level of disrespect towards the class of 2021 QB that can only be traced back to the fact he plays at the 4A level. The last time Hidden Valley played any of the schools we listed was 1988, losing to North Medford 40-12, South Medford 46-14, Grants pass 28-7, and beating Crater 7-0.

Despite just 13 miles—of driving; less in a straight line—of separation, the last time the Huskies and Trojans lined up against each other was in 1971 (North Marion won 21-0). Of all the 4A-2A potential matchups, this one seems to be the most even. Kennedy has blossomed into a perennial state contender in the last decade, and North Marion became something of contender in their own right in 2019. The excitement this game would bring might not radiate beyond the confines of Marion County, but it would peak our interest.

Few would argue Toledo isn’t one of the top teams at the 2A level coming into the season, and absolutely nobody would argue Santiam Christian isn’t the odds-on favorite at 3A. Besides the QB dual between Jaxon Rozewski and Ely Kennel, this would be one of the most talent-ridden games of the entire season 2A-4A. Would SC win? Probably, but wouldn’t it be great to see what Toledo could do against them? There are few teams at 3A that could make a serious swipe at the reigning champs, so why not give a 2A team a chance? The last time these two teams faced each other was 2013 (Santiam Christian won 33-2), and Santiam Christian holds an 8-0 all time record against the Boomers.

Old league rivals find each other once again. Marist owns the matchup record at 3-1, but since they last played in 2017 (Marist lost 14-50), Thurston has won two state titles. In a year where Marist is at its best position to win a state title in years, why not play now? The stars are aligning for this to happen; it needs to happen. Marist can likely get out of playing Thurston because of the high concentration of 3A and 4A opponents in the general Eugene area, but come on. This would be the matchup of the year for the South Valley.

Heppner has evaded the 3A powers of the east too long. Last time the Mustangs lined up against one of the EOL powers was the 2005 semifinals against Vale (Heppner lost 41-6). But that is the last time they played one of the EOL powers, not the last time they did so intentionally. The available archives and records don’t even show the last time Heppner played one of the 3A eastern powers in a regular season game. It’s high time. Get them on the same field against Vale, Nyssa, Burns, La Grande, or Baker. Just do it. They have their big boy pants on now, and they’re reigning champs. It’s time.

This really needs no introduction.

The only team to beat Banks in a true home game (physically at Banks HS) in the last five seasons: Scappoose. Since 2013, Banks is 31-1 in true home games against opponents not named Scappoose, with the only loss coming in 2014 to South Umpqua. In that same time frame, Banks is 1-2 against Scappoose in true home games. It’s one of the state’s best lost rivalries, so bring it back. The last time they played (2017), Scappoose won 51-49 on the road.

This one is simple: both schools haven’t been this good at the same time since the late 1980s. In a normal year, Sweet Home would be on the watchlist as a dark horse championship contender because they’re that talented. Lebanon boasts one of the nation’s best 2021 linebackers in Oregon commit Keith Brown, who recently announced he would play this spring instead of enrolling early in college as previously planned. If there were ever a moment where Sweet Home could absolutely compete with the bigger brother next door, it’s right now. Last time these two played each other was 1969, and Lebanon won 26-0.

One thought on “OSAA Tells Schools to Play Local, Here’s our Top 10 Out of Classification Games We want to see”