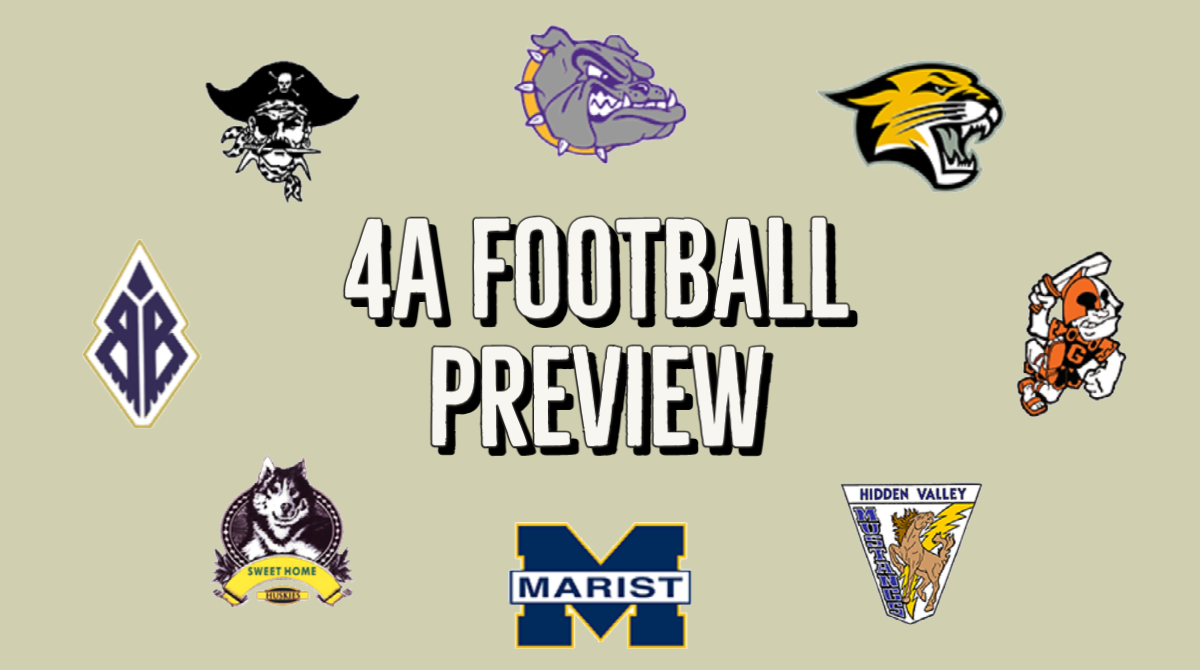 2020 would’ve produced one of the best title chases in recent memory, but we’ll have to take what we can get. What do we get? We have a criss-crossing of the state by the apparent powers that *could* end up giving us a de facto champion. Here’s what we see:

Why start with the Sky-Em League (SD4)? Usually in these articles, we start from the northwest corner of the state and go counter-clockwise, so why start in the middle? There is one reason: Marist. If they go undefeated, it’s game over. No discussion, the Spartans are the de facto state champions.

Why? It’s simple: Talent, coaching, and schedule. Marist returns the most all-state talent in 4A by a large margin and returns legendary head coach Frank Geske. In a normal year, that’s enough to get you ranked in the preseason top-three, no matter what classification you’re in; for us, it pushes Marist all the way to #1. Take that and put it through the gauntlet of North Bend and Cascade on the road to start, and add a pair of home games against Marshfield and 5A power Silverton, split by a trip to Elmira; that’s the test they need. It makes the math quite easy: beating all five of their opponents by any margin, nonetheless by blowout, puts Marist above all others. They will have proved themselves beyond any doubt. To us, they’re the preeminent favorite to win any kind of state title honor in whatever form that may come.

The Sky-Em has one other giant, though: Marshfield. Though a running of the table by the Pirates wouldn’t bring with it an untouchable claim to the state championship, they’d have one heck of an argument. Despite a bumpy start to the 2019 season, the Pirates rebounded and came within seven points of pulling the first #1 v. #16 upset in the playoffs in many, many years, and it was at Banks, no less. The talent coming back to Marshfield, headlined by QB Dom Montiel, is more than enough to put them well inside the preseason top-five. The matchup between Marshfield and Marist week five will go a long, long way in determining the bigger picture in 4A football.

This is probably the most wide-open league in the state at this time. Every other special district has a gap between the favorite, or favorites, and everybody else. In SD4, there’s a considerable gap between Marshfield and Marist and the rest of the field. SD1 is nowhere near this, despite the presence of Banks.

Seaside is going to be back in the fray sooner or later; our bet is on sooner. The Gulls have the players to compete: Levi Card and Andrew Teubner are returning all-state talent, and the team certainly has the coaching to compete. All that’s left is where they stack up. Similarly, Tillamook is an incredibly trendy pick. After their best season in over a decade, the Cheesemakers have the foundation to take control of this league or at least take a greater foothold than they’ve had in years past. Even Astoria has some buzz around it after being a dormant superpower for the last few seasons.

To overgeneralize: yes, Banks is the favorite here, but do not be shocked at all if Banks loses their league crown for the first time since 2017. It would not be because of any dropoff by the Braves, though there always could be, but because the depth of competition is rising.

This is a two-horse race. We know who one horse is, but the other is still up in the air.

Gladstone is one, and it’s obvious why. They are one of the most talented, best-coached, and experienced teams in this league. Gladstone will be in the top two here; you can take it to the bank.

As usual, it gets muddy once you get past #1. North Marion had something of a dream season last year, but they were ravaged by graduation and had a reshuffling of the coaching staff. Crook County was one of the more surprising teams early last season but couldn’t sustain the success and finish games down the stretch. What do the Cowboys look like a year and a half removed from competition? Estacada didn’t have a bad loss last year and weren’t too ravaged by graduation, but are they ready to take the next step? Do they have the components to put up a good fight against great teams, not just good ones?

Who wants to be that second horse?

At this time, we can’t be sure. There are arguments to be made for pretty much every team in this league. In a five-game season, the shifts from one team to another will be violent every week. Similar to SD1, there’s depth of some sort here. The question is who will separate from that depth.

Here’s the one question that determines the fate of this league: what does the passing game of Sweet Home look like? If it clicks, and if Aiden Tyler and company can score at the volume some think they can, it is game over; Sweet Home’s your league champion. If not, the door is open for Cascade or Stayton to slip in there, but the bottom line is Sweet Home controls their own destiny.

Cascade is the first in line to compete with Sweet Home, despite their relative youth.

They didn’t have any bad losses last year but were hit by graduation harder than most in this league. It’s the same story with Stayton. If either team surpasses expectations in conjunction with a Sweet Home fall from grace, it’s very easy to see that team competing for the #1 spot.

There’s really not a whole lot to break down here. It all comes down to which team clicks at a higher level the fastest.

Disregard Hidden Valley technically being in 5A: they’re playing a 4A SD5 schedule with 4A SD5 athletes, and they’re members of 4A SD5/Skyline Conference. With that said, here’s how they stack up.

Hidden Valley is in the same category as Marist and Sweet Home: If they hit their ceiling, they’re league champs. They have an array of returning all-state talent, experience returning from the 3A state title game a year ago, and an incredible amount of hype, despite the departure of Sam Vidlak. Notable returners include Tobias Powers, Lawrence Matusik, Jacob Tacket, Nate Vidlak, and Matt Iwamizu, just to name a few. It’s a state-championship roster, Sam Vidlak or not.

Mazama spent virtually the entire season in our top-five the last go around only to lose in the first round at home to Tillamook. There’s enough remaining of that squad to justify another top-five ranking, but there are serious questions revolving around the consistency of the Vikings. For example, beating North Valley 42-0 on the road is quite a feat, but following that up by losing to Marist by 34 and ending up in a dog fight with a 1-7 Klamath Union team is a major red flag. This pattern has been prevalent in Mazama for a while now. Similar to Estacada, we know Mazama can beat the good teams, but can they beat the great ones? If the answer is yes, and the Vikings see themselves as serious contenders (as a top-five team should be), it’s time to show it.

Henley had something of a breakout season last year, going 7-2 and hosting a playoff game, but had an unexpectedly early exit. Losing to The Dalles in round one, even though they went on to make the semifinals, was one of the more surprising upsets in the state last season. With a roster mostly still intact, a successful reclamation project could be in store here. 5-0 would be a bit of a stretch to predict, but 4-1 is certainly within reach. 4-1, with a presumptive loss to Hidden Valley in this example, puts Henley well within the top-ten, and in a normal year would probably land them another home playoff game to try and undo the disappointing end to 2019. Henley is a team to keep an eye on, and a lot will be learned week one against Mazama.

Baker is probably the flagship program over east right now and will probably be the measuring stick for the league as a whole this year and beyond. La Grande, despite being reigning 4A champs, were hit with a baseball bat to the knee by graduation: twenty-two seniors departed, an unthinkable amount for most schools, regardless of classification. The equation for Baker being the favorite to win this league/super-conference is simple: they have the most players coming back and an established program. It’s really that simple.

Beyond that, the pecking order of years past persists. La Grande, despite the imminent fall from grace, will be a solid #2. Losing that much experience hurts, but the depth behind the starters from 2019 got four extra weeks of practice during the playoffs; don’t underestimate how valuable that is.

Between Ontario and McLaughlin, one will have to step up and take 3rd. Ontario went winless a year ago, and Mcloughlin was three points away in the Philomath game from joining them. There’s reason for optimism in both programs. Between coaching changes and an influx of new talent, there’s enough new air for both to have some tug on their sails, but that will not manifest fully this spring. These five weeks will be all about finding the correct trajectory into the fall: what can you build, and what foundations can be laid leading into the 2021 fall season. That’s what’s going to be the storyline coming out of these two programs.

Burns is playing a JV-only schedule.