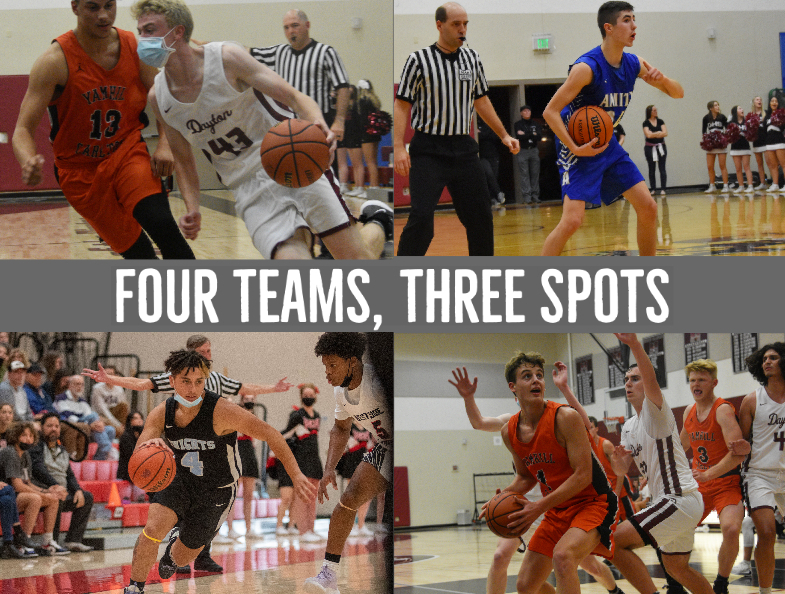 The debate should be settled with Amity’s win over Dayton 52-45, but, sadly, the angling will only ramp up from here. As a group which has seen every team in the at-large bid chase multiple times both in person and on NFHS, has talked to multiple coaches, players, and media members both inside and outside of the respective leagues, and has done extensive film study, we have come to one conclusion and one conclusion only: the PacWest conference deserves three teams in the elite-8.

The Lewis and Clark League is usually one of the deepest in the 3A classification, but that can not be said in terms of top-end talent this year; it pales in comparison to the PacWest. The LCL features some talented players like Andrew Vaughan, Ubedei McGautha, and Jameson Ye, and we are not discounting that; however, these stars are sparsely spread out, and frankly, the depth isn’t there. Meanwhile, the PacWest features two teams with multiple first-team all-state players: Amity and Yamhill-Carlton. Josh Wart, Keenan Graham, and the Seeley-Roberts twins are all either locks or bubble first-team players. Players like Isaac Watcherson, Logan Grove, and Trey Richmond are either locks or bubble second-team players. All seven of these players are on just two teams. Throw in Dawson Ashley, Tyler Spink, Justin Morales, George Hatch, and Mikel Rivas, who on their own all could find themselves on all-state lists to end the season, and the disparity between the two leagues is quite clear. The best way it can be summed up is this: the median team in the Lewis and Clark league is a non-playoff team, Riverdale. The median team in the Pacwest (take your pick of the top three) could easily win the state title. That’s the difference.

Amity played a tough non-league schedule, beating two of the top teams in 2A in Western Christian and Kennedy by comfortable margins, and at one point Amity went on a 37-0 run against Kennedy. Amity also went on the road and beat a solid Willamina team, who will have an automatic bid into the elite-8 and at the time still had all-league guard Dominik Bryant. Amity’s only losses on the year came by a combined 19 points to two state title contenders. Excluding their four games against Dayton and Yamhill Carlton, their closest game of the year was a 15 point win at Willamina who, again, will be in the elite-8. The Warriors have the resume to be in, the coaching to be in, and a level of talent that may rise to the highest level the storied Amity program has ever seen. The Warriors deserve a spot.

Though this is possibly the least talented roster Dayton has had in the last decade, they have overachieved more than any Dayton team in recent memory. Dawson Ashley and Tyler Spink have elevated their games to levels we weren’t sure were possible in the preseason, and they did it at the perfect time. This is one of Ron Hop’s best coaching jobs of his career. Not only did the Pirates split with both YC and Amity, they also beat Santiam Christian, who will be in the elite-8, by 12 points to open the year. The Pirates went on the road and beat an Astoria team who, despite their record, has proven to be a tough out for teams like Seaside and Banks, who are currently in the hunt for the title in 4A. Their lone loss outside their league rivals came by nine points to Salem Academy, who has become the favorite to win the 2A title. The Pirates deserve a spot.

Yamhill Carlton has played probably the toughest schedule of anybody 1A-4A.  Not only did they have to go against the juggernauts of Amity and Dayton, against whom they split both season series, they went on the road without two starters and nearly beat Cascade in overtime. Moroni and Malachi Seely-Roberts, just sophomores, nearly single-handedly knocked off one of the best teams in 4A on the road in overtime. They did so just 18 hours after losing by three to Amity at home in an exhausting back-and-forth game that clocked out to be the fastest paced contest we’ve been at all year (2.281 possessions per team per minute). The Tigers beat Columbia Christian by 25 points on the road on the second night of a back-to-back, and it was also their third game in four days. They went through all that and came out of it with three losses by a combined 10 points. A mere 10 points separates the Tigers from being undefeated and having swept two 3A contenders and beating a predominant 4A favorite in their own building, all while leading the state in points per game at 71.4 while only allowing 45.5, a difference of 25.9 points per game. It suffices to say the Tigers deserve a spot.

So what about De La Salle or Westside? Certainly, this means one of them is out if all three Pacwest teams are in? Yes, that’s exactly what it means, and that’s the way it should be.

The Eagles just capped off their best season in school history. It took them a while to get it going: they were set back by COVID and injuries, but they eventually figured it out and found a way to win where it mattered. David Henry will be the league coach of the year and deservedly so. This kind of team has been in the works for years, and it’s a testament to patience and hard work that Coach Henry is in this position now. However, had they lost to De La Salle last week, there would be no advocacy on our end for them to be in the elite-8. Simply put, they did what they needed to, and they have the talent and coaching one would want in a human-selected elite-8. They will give matchup problems to whomever they play in the first round. The Eagles have earned their spot.

The odd man out, as we’ve now outlined, is De La Salle, and this is not by accident. We’ve seen the Knights nine times this season in-person and using NFHS, and only once have they passed the eye test. This De La Salle team has talent, and a team coached by James Broadus is bound to find some success, but as we’ve stated in previous articles, it is just not there. The legendary De La Salle press no longer has its luster or effectiveness, the perimeter barrage they would so regularly employ against anyone and everyone no longer falls through the net, and the intimidation which would take hold whenever they entered a gym is no longer present. We tried and tried to see something that wasn’t there: It. There is no it to this De La Salle team. Similarly to Dayton, this version of the Knights overperforms at times; however, the underwhelming  performances outnumber the impressive ones. The following can be said about Westside as well, but considering they have earned their way in, it’s a moot point: contending teams blow the doors off non-playoff teams. It doesn’t matter what sport, it doesn’t matter what league, and it doesn’t matter what level; it’s the natural order of things. The problem with De La Salle, and what should have been a warning sign for us initially, is a lack of ability in this area. Riverdale and Catlin Gabel have some players, but their talent does not rise to the level of a playoff team. We have nothing against either of these schools, nor any of the schools being discussed, but this is our evaluation having seen them all multiple times. Riverdale overachieved for what they have, but that doesn’t mean you should nearly lose to them twice if you are a true title contender. Catlin Gabel has one of the better players in the Lewis and Clark League in Jonnah Zeller, but a true title-contending team should not nearly lose to them twice, especially by one point in the last game of the regular season in the midst of a race for the final at-large bid. There is a reason both these teams opted out of the state tournament: they never had a chance. If you are a true title contender and have the right to bump out another contender from the elite-8 so you have a chance, there is no reason to nearly lose to two teams who acknowledge they themselves have no chance at a title. Amity, Dayton, or Yamhill-Carlton nearly losing to Blanchet or Scio even once would have brought scrutiny from every direction, but instead, the closest either of those teams were to beating a contender was Blanchet keeping it within 18 of Amity, besides that every other result ranged from a 30 to 77 point differential. The same criteria and standards have to be upheld, and in that framework, De La Salle comes up short.

To boil it down, one of the common ways to evaluate teams is a simple equation: competition x results = value.  De La Salle’s competition on a weekly basis is weaker than that of the three contenders in the PacWest, which would lead one to expect better results from the Knights if they are truly more valuable. The weaker competition, paired with underwhelming results on the floor and underwhelming results in the eye test, should lead to one final conclusion: De La Salle does not deserve a spot.

The Knights are a good team, and if the elite-8 were picked purely by merit, they would make it without a doubt. However, with automatic bids in play, someone has to end up on the short end of the stick, and it would be a mistake if that were any team other than De La Salle.