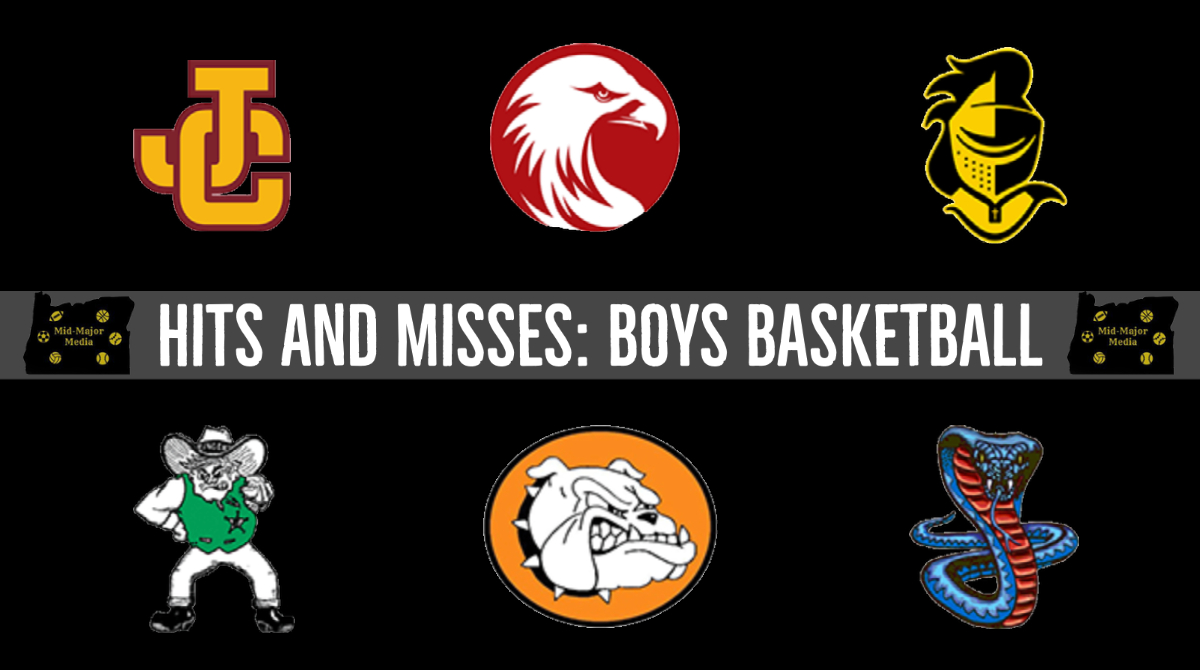 Our process for projecting how things will shake out in various sports is complex and varies by season and year, and it is ultimately scrutinized internally and refined to produce better results next time around. This process churns out, on balance, more accurate predictions than faulty ones. Usually, we keep this hand wringing in-house, but in the spirit of transparency and content generation, we want to bring it to the forefront. Here, we will be highlighting our hits and acknowledging our, at times, egregious whiffs:

This is a miss on margin. We picked North Marion to end up second in league with Corbett, Madras, and Estacada fighting for 3rd, but none of them would compete against Gladstone for the league crown. Ultimately, all you had to do was put North Marion in the #4 slot and have Corbett and Estacada fighting for 2nd. This was our biggest miss, which in the grand scheme of things is a glowing endorsement of our 4A preseason evaluations. Estacada gets the nod over Corbett simply because of their head-to-head record.

We hedged our bet a bit by putting them at only #8 in our preseason top-10, but we nonetheless were ahead of the curve. Here’s what we said:

“Junction City could have a seriously loud return to prominence this year. Yet another ‘A’ level coaching + talent pair, Craig Rothenberger brings back First Team All-League Riley Sangermano and Second Team All-League Chris Ohman and Ben Heitz. The Tigers will feature seven upperclassmen, which by no stretch is a large haul but is enough to consider JC a very real Forest Grove contender. There’s also something to be said about Coach Rothenburger and his place in history. Few coaches become synonymous with their school/program like Coach Rothenburger has. Few within that subgroup end up with a ‘storybook ending’, which could mean anything from winning a state title immediately preceding retirement or just a magical run of some sort. Some sort of ‘farewell tour’ besets most legends, whether or not they end at the state tournament. We have no inside information about Coach Rothenburger’s intentions in terms of how long he intends to keep heading up the Tigers, but one would think there is one last run in the JC program before he gives up the reins. As the second winningest active coach in the state of Oregon and sixth all-time, if there was anyone ever deserving of a ‘farewell tour’ ending on the highest stage, it would be Craig Rothenburger. This season, in whatever fashion it might come, may provide that opportunity.”

Junction City is a town and school that’s easy to root for, so this pick had the added benefit of ending up a feel-good story. It wasn’t a home-run but definitely at least a gap double.

Another miss on margin. Here’s what we said:

“Willamina returns the most seniors in the CRL and will have seven juniors off the 2019-20 varsity roster return. If Rainier doesn’t click, or Willamina booms, the Bulldogs could end up winning the league outright.”

Ultimately, that’s what happened. Rainier didn’t click, and Willamina filled the gap. We missed what was right in front of us. We saw it but didn’t pick it. This was our biggest miss, which in the grand scheme of things is a glowing endorsement of our 3A preseason evaluations.

It’s not like picking Westside to win the league was that much of a gamble (they were a trendy pick despite little history), both we and B-Ball Dream predicted it to happen, but what happened underneath it was where the ball met the bat. PAA ended up being legit, OES ended up struggling, and DLS weren’t their former selves. Bingo, Bango, Bongo. Check, check, and check. Except for flipping OES and Riverdale in the final league standings, we nearly went perfect in the most turbulent year the LCL has seen in a long time. Here’s some of what we said:

“There’s a lot of chatter about DLS regressing significantly. Yes, Ubedei McGautha does return. Yes, James Broadus II is still coaching the Knights. But there is so much roster turnover on this roster, most notably the departure of George Sadi, that for the first time in a long time, the Knights aren’t the preordained champions of the LCL.

In fact, they might not even be guaranteed second. Portland Adventist quietly had a very productive season in 2019-20, and by the middle of February were one of the hottest teams in the state. The Cougars knocked off DLS in their last regular season game of the year and came within a point of knocking off Riverdale in the league playoffs and getting a chance to knock off OES. Returning All-League Forward Andrew Vaughn is the focal point of the six returning seniors, and if the trajectory holds and the matchup with DLS ends up being as favorable as we think it is, PAA could compete for that second automatic spot …

But the second automatic spot, not the first automatic spot. That belongs to someone else: Westside. Yes, the perennial “eventually they’ll pop” team in the LCL finally will pop. Multiple high profile transfers and development of in-house talent, paired with one of the best young coaches in the state, David Henry, will make Westside one of the biggest stories in 3A this season. Their ceiling is at a championship level, and it’s very easy to see them reaching Coos Bay as a top-four seed. The long build at Westside since Coach Henry’s arrival in 2015 is finally going to reach the state’s highest stage, and that includes being the favorites in the LCL”

We completely whiffed on both of these so badly that we didn’t even talk about them in our preview. Jefferson and Central Linn were picked 5th and 6th, respectively, in the Central Valley Conference for us, an egregious pair of whiffs. Central Linn gets the nod over Jefferson because, well, they made the state semi-finals and en-route beat Jefferson head-to-head. We reacted to Jefferson’s meteoric rise quickly enough, putting them in our top-10 virtually the whole season, but Central Linn didn’t get the same treatment. It was too slow a reaction.

To be honest, we didn’t stick with Columbia Christian all season. At times, they were even on the outside of our top-10. But, this is a review of what we said in the preseason, so it counts. Here’s what we said:

“A return to Pendleton shouldn’t be out of the question for the Knights, and that might become the expectation depending upon how they start”

Making the championship game fits the mold, even if it wasn’t a straight forward path to getting there.

All in all, it was a pretty good year for us on the boys side. There weren’t many egregious misses, and the swings we took on hidden gems panned out more often than not. In the 4A and 3A playoffs, we successfully picked the winners of 12 out of 14 games, only missing on De La Salle @ Dayton and Woodburn @ Junction City, both of which we acknowledged could go either way. We had a 100% successful pick rate down in Coos Bay, a 85% successful playoff pick rate overall, and top-10s that after week two didn’t change a whole lot. Not bad. Not bad at all.