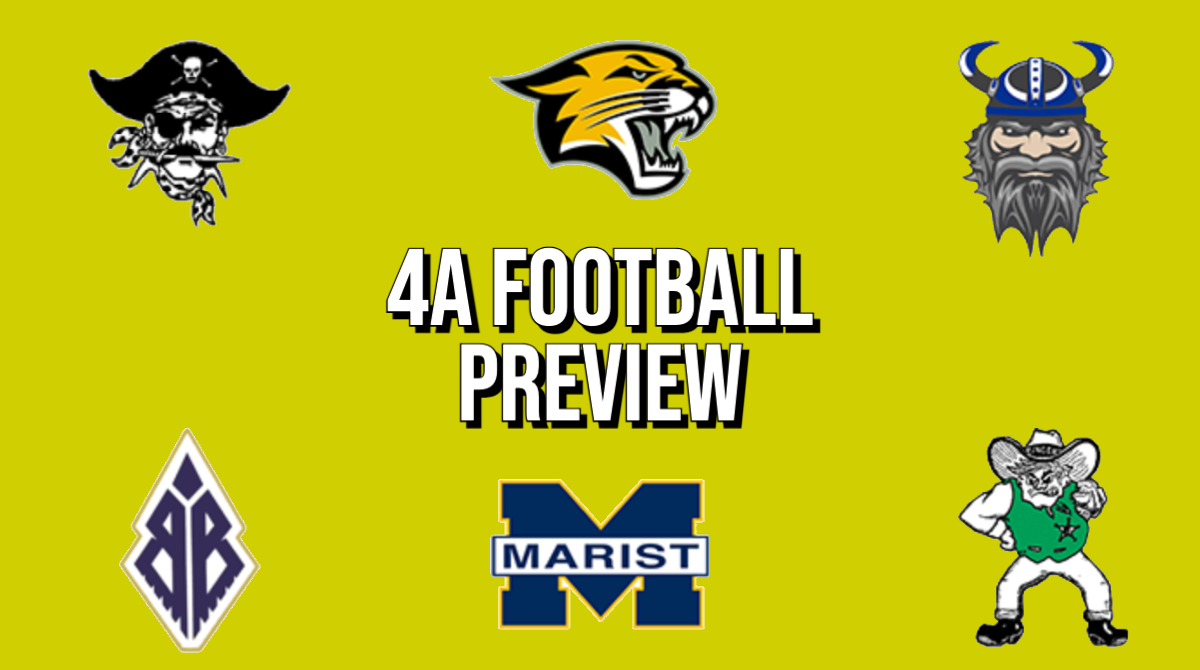 What did you miss most about a ‘normal’ football season? A full playoff? Non-sub-50-degree kickoffs in week two?

For us, it was the crisp sunset of an early September evening giving way to the overhead lights of a freshly-prepared football field; it’s the scenery that goes into and the product that comes out of those early season contests where the sun is still high, the rust a-plenty, and the enthusiasm pure.

Anyhow, let’s get into it. In 4A here’s how we see things:

It’s still Banks’ league to lose, right? Technically, yes. But the ‘to lose’ portion isn’t nearly as much as a lock as it has been recently. The Braves bring back the bulk of a core that, outside of a trouncing by Mazama partially produced by an impossibly short amount of prep time, dominated everyone against whom they lined up. In a normal year, without COVID precautions and mid week cancelations, Banks would’ve been a favorite to win it all despite the loss to Mazama. There’s no reason to think Banks will fall off this prime plateau of contention, but there is blood in the water.

It would appear the most prominent obstacle will be the ever ornery Seaside Seagulls. Entering year three of the Aaron Tanabe era, Seaside seems to be on the rise again. Yes, the spring only brought with it a 2-2 record, but between being robbed of an opportunity to play Banks in week three and one of the losses coming against the next team we’ll talk about, we’re not going to read too much into it. On film, when Seaside was on, they were good. We had them in our top-10 or close to it most of the spring, and they’ll start there in the fall. There are reasons to believe here, not the least of which is the bountiful amount of upperclassmen talent Seaside will boast.

There’s also a dormant superpower waking up, and it’s doing so with a vengeance: Astoria. That’s right, folks: Howard Rub and Poyertown are back in the thick of it. A lot of the things we talk about with Seaside apply to the Fisherman as well. They have a roster dominated by upperclassmen, are largely returning production from last season, and play a schedule that doesn’t feature any back-to-back road trips nor trips to Seaside or Banks. Pair this with legend Howard Rub, going into his 21st season with Astoria, and you have the makings of what could be a fairly loud return to prominence.

There’s really one question in this league: how quickly does Gladstone reload? This isn’t a situation where it’s simply maturing talent coming into its own, ready to take a program from point A to point B; this is a situation in which maturing talent has to replace some legends. Gladstone is more similar to someone like Heppner or Amity than it is to Seaside or Astoria, but even then, it isn’t super comparable. Gladstone is in a very unique position: reload, not rebuild, on-the-fly with a new coach. Very rarely does a state contender replace its coach and lose as many contributors as Gladstone did this spring and jump straight back into the contending picture (it’s taken Seaside a few seasons to come back, it took years for Rainier to come back in to the picture after the departure of Thor Ware, etc.), but the Gladiators might just be able to pull it off. They’ll be a little less experienced than they were in the spring, but they’re absolutely loaded with upperclassman talent. If they walk into Banks week one and give the Braves a stiff challenge, or even win, watch out.

However, this league right now looks like it’s Estacada’s to lose. The Rangers absolutely throttled some good teams in the spring, including Astoria and Crook County, and even beat perennial 5A powerhouse Lebanon (ignore the 1-5 record; they played some really, really good teams. Don’t final-score watch. Ever.) Returning the core of their production, they’re an easy pick to make at the top spot in this league. But again, watch out for Gladstone. This could be one of the more hotly-contested league title races if they hit.

Cascade should win this league and has a good chance to do so handily. There’s not a whole lot to break down here: they’re loaded, they’re well-coached, they’re senior heavy, and they have the trajectory of a state contender, which is something that’s hard to say about anyone else in the league. There are some fine programs here and some fascinating story lines: Randy Nyquist coming off a down year at Stayton and how the Eagles rebound with an upperclassmen-heavy roster and a full summer to get the wheels rolling again, what Sweet Home looks like under new coach Ryan Adams after the departure of Dustin Nichol and Quarterback Aiden Tyler, can Woodburn take the next step and become a bubble playoff team with their relatively experienced roster, and what does Newport look like after a season of turbulence concerning COVID-19 restrictions on the coast limiting them to only four contests in the spring? There are a lot of story lines here to watch, and though they may not have much immediate impact, they may have a say about the OWC’s trajectory. Barring Stayton booming, which is a distinct possibility considering Randy Nyquist’s reputation and only graduating one player off their spring roster, this should be Cascade’s league title to lose. The OWC may sneak a third team into the playoffs, though, so watch out for that.

This is the heavyweight conference, and it’s been a long time coming. Marshfield is primed to be the state leader from day one, Marist is right behind them and squarely in the chase for a championship game berth, and even some of the perceived “others”—don’t take your eye off some of them—have intrigue.

It goes without saying that Marshfield is favored to win this league and probably the state title. Dom Montiel is one of, if not the most, electric players in 4A football, the cacophony of receivers they boast is only rivaled by the group Hidden Valley has fielded for the last two go-arounds, and they’re incredibly well-coached and supported. Marshfield has all the characteristics of a contender and probably has the highest ceiling out of anybody in the state. This is their league, and probably state, to lose.

Marist isn’t terribly far behind; any Frank Geske coached team never will be. Do they have to replace multiple all-state level guys? Yes, but wouldn’t you expect that from a state contender? There was prevalent chatter that claimed Banks would fall off after graduating a large group of all-state players after their historic 2018 team, but they reloaded incredibly quickly and made the state title game the following year. Reloading is a hard task, but it’s not impossible. When you have players like Lucas Tuski, anything’s possible.

Keep your eye on North Eugene. There’s something to the Highlanders. There might be four playoff teams in this league between them and Elmira.

Two big questions here: How quickly can Mazama reload, and what does Hidden Valley look like under Mike Fanger?

The first *probably* is more important. Mazama has to replace a lot. They no doubt have talent waiting in the wings, but like an extreme version of Gladstone, they’re not just replacing talent: they’re replacing legends. Can the vertical game Cole Brosterhous catalyzed be replicated by a host of newcomers? Can the efficiency of Tristan Lee in the triple option be mostly replaced? Can a defense that held some of the state’s most prominent programs, coaches, and players to shutouts at least come close to running it back? That, in all likelihood, is the biggest question in 4A football.

Hidden Valley’s new man is one of the other big stories. Mike Fanger, no stranger to Oregon High School football, takes over a Mustang program that’s been on the verge for two seasons now. An outsider might think their championship window has closed, but don’t tell Nate Vidlak that. Don’t tell Noah Stone that. There’s no “graduate and plummet” scenario here for Hidden Valley; they’re going to come out swinging. The question is: what does that swinging look like? How is Vidlak being used, how is HIdden Valley able to adapt to the various styles of offenses they’re going to see, and what is the identity of HV football are all looming questions. There’s real boom potential here. Keep your eye on the Mustangs.

Below that, there are a lot of unknowns, enough to where it’s really difficult to project a final standing below second place. Henley’s well-coached, so keep an eye on them for a phantom upset and a possible playoff berth, but it’s hard to tell.

La Grande probably should win the east. They have a considerable amount of talent coming back, a well-established program, and a favorable schedule headed into their toughest league matchup, Baker. There’s a chance the Tigers could fall out of first place over east, but there’s virtually no chance of them falling below second and out of the playoffs. La Grande could be a sneaky title pick if they come out of week six undefeated, which is something to keep your eye on.

There is not yet a lot of concrete knowledge about Baker. Could they be a legit playoff team capable of going on the road and knocking off someone like a Estacada or a Hidden Valley? Sure, they could. Could they be a one-and-done, sweet-16 exit team that gets bounced by someone like Banks or Cascade? Sure, they could. There’s not a consensus around where Baker’s ceiling and floor is, which is usually what we try to pin down when we talk to people.

Overall, there’s not a whole lot to work with concerning projections of the GOL other than that La Grande should win, and Baker should finish second. In a league of four teams, that’s all you need anyway, right?